Aiman Ezzat succeeds Paul Hermelin as Chief Executive Officer, with Paul Hermelin retaining the chairmanship of the Board of Directors.

Paris, May 20, 2020 – The Shareholders’ Meeting of Capgemini SE, held today behind closed doors, adopted all of the resolutions put to the vote. Aiman Ezzat succeeds Paul Hermelin as Chief Executive Officer, with Paul Hermelin retaining the chairmanship of the Board of Directors.

In accordance with the emergency measures adopted by the French Government to curb the spread of Covid-19, the Company’s Annual General Meeting was held today behind closed doors, without the physical presence of shareholders, with a live webcast on the Company’s website. The entire vote took place by mail and the shareholders adopted all the resolutions presented with a quorum of 69%.

In addition, the Board of Directors meeting at the end of the Shareholders’ Meeting decided unanimously, on the recommendation of the Ethics and Governance Committee and in accordance with the announcements made on September 16, 2019, to adopt a form of governance that separates the functions of Chairman and Chief Executive Officer, in which Paul Hermelin remains Chairman of the Board, while Aiman Ezzat assumes the role of Chief Executive Officer as the sole executive corporate officer.

At the Shareholders’ Meeting, Paul Hermelin recalled the highlights of 2019 and the management transition initiated in 2017:

“2019 was a rich and successful year for Capgemini, with growing results and the Altran acquisition project, which has since been finalized, giving us a new dimension. As of today, a new governance structure has been put in place. On my proposal, the Board of Directors has appointed Aiman Ezzat Chief Executive Officer of the Capgemini Group. He will be the fourth in the 53 years of its existence. Aiman has worked alongside me for more than 15 years and I am convinced that he will continue to grow our company. I am therefore very pleased with his appointment and am delighted that the managerial transition has taken place under very good conditions, with respect for everyone and transparency. As Chairman of the Board of Directors, I will oversee the development of this Group that I love so much.”

At the end of the Shareholders’ Meeting, Aiman Ezzat stated: “I would like to thank Paul Hermelin and the Board of Directors once again for their confidence. I am taking over the management of a healthy Group, with 270,000 employees on whom I know I can count and who are ready to meet any challenge. The agility, solidarity and resilience demonstrated during this exceptional period of the health crisis strengthens my determination and my confidence in Capgemini’s future. I am aware of my responsibility towards all stakeholders, employees, clients, partners and shareholders. As a major player in our industry and committed to environmental responsibility, we must also ensure the harmonious and ethical development of new technologies for the benefit of all. I will work on this, too, with passion.”

At the shareholders’ Meeting, shareholders approved the distribution of a dividend of 1.35 euro per share in respect of the 2019 financial year, to be paid from June 5, 2020, with a coupon detachment date of June 3, 2020.

The Shareholders’ Meeting approved the resolutions concerning the composition of the Board of Directors:

– Aiman Ezzat was also appointed as a member of the Board of Directors for a four-year term;

– Siân Herbert-Jones, an independent director, was reappointed for a four-year term;

Furthermore, as part of the employee representation system, Kevin Masters and Hervé Jeannin were designated as directors for a four-year term of office starting May 20, 2020.

At the end of this Shareholders’ Meeting, the Board of Directors of Capgemini SE now has 15 directors, including two directors representing employees[2]. Of its members, 75% are independent directors[3], 27% are international directors and 42% are women[4]. This composition reflects the Board’s renewed ambition to pursue its internationalization, to deepen its sectoral expertise and to enrich the diversity of its profiles.

Finally, the Shareholders’ Meeting approved all the financial delegations granted to the Board of Directors.

A detailed breakdown of voting results as well as full webcast of the General Meeting can be found on the Capgemini website:

This press release does not contain or constitute an offer of securities for sale or an invitation or inducement to invest in securities in France, the United States or any other jurisdiction.

Aiman Ezzat was appointed Chief Executive Officer of the Capgemini Group on 20 May 2020, at the close of the Annual General Meeting of Shareholders. 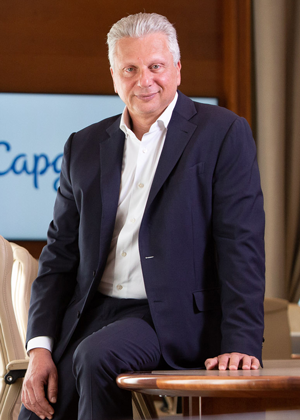 During his tenure as Chief Operating Officer (from January 1, 2018 to May 2020) and prior to this as Chief Financial Officer, from December 2012 to 2018, Aiman reinforced both the Group’s position as a global leader as well as its financial resilience. He also played an instrumental role in the implementation of the Group’s new operating model.

With more than 20 years’ experience at Capgemini, he has developed a deep knowledge of the Group’s main businesses and has worked in many countries, notably the UK and the US, where he lived for more than 15 years.

In November 2007, Aiman was appointed COO of the Financial Services Global Business Unit (GBU) and became its Global Head in December 2008 which he held up until 2012. This sector has become the Group’s largest worldwide.

From 2005 to 2007, Aiman was Capgemini’s Deputy Director of Strategy, during which time he participated in several transformation projects including the turnaround of the activity in the United States and the development of offshore capabilities in India. He played a very active role in the acquisition and integration of Kanbay, a global IT services firm focused on the financial services industry, which marked the acceleration of establishing Capgemini’s presence in India.

Before joining Capgemini in 2000, Aiman served as Managing Director of International Operations at a global business and technology company, with responsibility for Asia and Europe.

This came after nine years at Gemini Consulting, the former brand of the strategic and transformation consulting arm of the Capgemini Group, now Capgemini Invent, where he held a number of roles including Global Head of the Oil and Chemicals practice.

A biography of the new director, Ms. Belen Moscoso del Prado, is presented in Capgemini press release from March 11th, 2020

Composition of the Capgemini SE Board of Directors and of its committees following the Shareholders’ Meeting of May 20, 2020

Composition of the Board of Directors:

The Board of Directors meeting on May 20, 2020 at the end of the Shareholders’ Meeting modified the composition of its committees as follows:

Capgemini is a global leader in consulting, digital transformation, technology, and engineering services. The Group is at the forefront of innovation to address the entire breadth of clients’ opportunities in the evolving world of cloud, digital and platforms. Building on its strong 50-year heritage and deep industry-specific expertise, Capgemini enables organizations to realize their business ambitions through an array of services from strategy to operations. A responsible and multicultural company of 265,000 people in nearly 50 countries, Capgemini’s purpose is to unleash human energy through technology for an inclusive and sustainable future. With Altran, the Group reported 2019 combined global revenues of €17 billion.